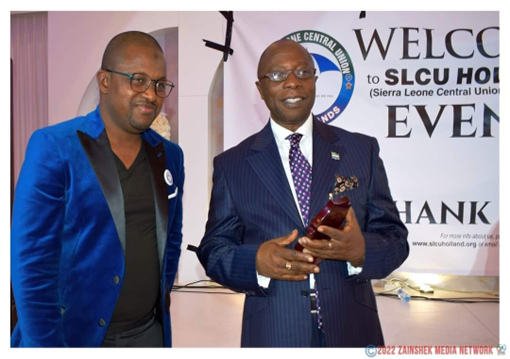 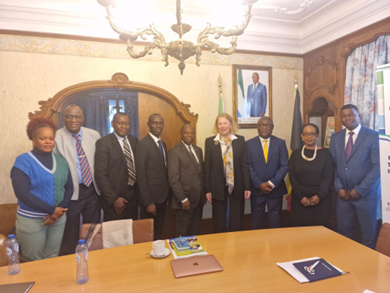 The Sierra Leone Embassy in Brussels has, in two respective meetings, engaged the newly appointed Honorary Consul for the Netherlands, ...
Read More
DEPUTY AMBASSADOR CALLS ON SIERRA LEONEANS FOR COMMITTMENT TO NATIONAL COHESION

As part of the Mission’s mandate to engage and coordinate diaspora activities to contribute meaningfully to Sierra Leone’s development trajectory, the Deputy Ambassador of the Sierra Leone Embassy in Belgium, Harold Bundu Saffa, has called on Sierra Leoneans in the Netherlands to build strong commitment through engagement with various organisations to attract development for Sierra Leone.

Deputy Ambassador made the statement during the Sierra Leone Central Union Dinner and Awards of committed Sierra Leoneans in Europe held over the weekend.

Speaking on the topic “Community Cohesion for National Development”, the Deputy Ambassador stated that the theme was not only necessary because it challenged each Sierra Leonean to dig deeper into making them a strong Community of Sierra Leoneans in the Netherlands but also good citizens in the diaspora playing a critical role in the country’s development.

On the approaches to building a strong community, he maintained, “We must accept that we all have different plans and purposes for which we are here. But the thread that runs through us is the need to better ourselves and our families. In the pursuit of that goal, we need not just our individual talents and skills, but we also need strong social networks for various reasons”.

“As a diaspora community, we do not live and operate in silos; we live alongside our host communities. Therefore, we should never forget that our actions, and sometimes inactions have a direct impact on our host countries,

“It is imperative to always remember that you are Ambassadors of your Sierra Leone. Keeping that in mind, whatever steps you take, individually or collectively, you will be judged by your comportment,” the DA said.

DA Saffa also noted that a strong community with a critical and progressive mindset could be a pillar of the country’s core beliefs and values, thereby positively impacting Sierra Leone.

Concluding, he went on to challenge them, “It will be a contradiction to claim to have a sense of belonging to one’s country if one is engaging in acts that have the potential to cause violence and instability in one’s country.  You cannot claim to have a sense of belonging if your actions cast a pall on the image of your country and scare away investors who are likely to bring employment opportunities to your compatriots. Maintaining your contributions, especially remittance will not have a positive impact if you engage in fueling violence and instability.”

The President of the Sierra Leone Central Union (SLCU), Mohamed Alie Bah, highlighted some of the activities they had undertaken in Sierra Leone over the years, inclusive of the construction of a school in Lungi. The President commended the government for its bold step to recognise the school, thereby providing them vouchers for salaries. That, he said, was a testament to the government’s priority on education.

Mohamed Alie Bah further disclosed that they were faced with challenges in continuing their development strides in Sierra Leone because of COVID, but that they had come back strong, which had urged them to have SLCU Branch in Sierra Leone. He observed that the awards were a form of recognition for the hard work of Sierra Leoneans in Europe, which would serve as a motivation to others.