At the end of the two days AU EU summit for Heads of State in Brussels, His Excellency President Julius ...
Read More
As Minister Sengeh Engages the Assistant Director-General of UNESCO…Sierra Leone in Race to Host a Global UNESCO Event 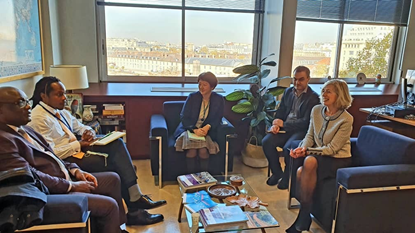 In an interview with the Minister at the end of the engagement, Dr Sengeh revealed that three important issues were discussed in the area of the UNESCO programme for Sierra Leone and the country’s role in shaping Global Education.

He observed that: “Sierra Leone is one of the few countries who expanded its education budget during the COVID-19 pandemic and the country continues to lead on conversations on inclusion around the world.”

On gains made in the area of education, the Minister maintained that Sierra Leone focuses on technology and innovation, which are things that need to be promoted, and that the country has a clear focus on evidence-based policy and decision making.

“Because of these gains, the country has taken a lead role in many things related to global education and this is why during the engagement with the UNESCO Assistant Director General of Education, Sierra Leone has been considered to host the global launch of GEM Report in the future,” the Minister stated.

“This programme,” he echoed, “will bring people together from all across the world to Sierra Leone, from the leadership of schools to the UN organizations. So over the next two years, the country will be planning this major global event around education which is a really great honour and privilege for us.”

The Minister of Basic and Senior Secondary School also explained the benefits of such an education gathering, adding that the benefits of education are not immediate but rather are long term. Giving the historical perspective of Sierra Leone’s educational system, once dubbed the Athens of West Africa with the establishment of the University of Sierra Leone, the Minister stressed the importance of investing in education. He added that the world stopped investing in public education in developing countries and it took a long time for such an impact to be felt, as education went rock bottom post-independence in Africa.

He added: “We do not expect it will take another 20 years for us to begin to see the positive effects of current investments because it is a different world. It’s not something that makes an immediate impact. But in this particular instance, we will bring together global leaders on Education Policy, technology companies and more investments in education to work with us in Sierra Leone.”

Dr Sengeh went on to disclose that the issue of Sierra Leone’s difficulty in benefiting from UNESCO due to the country’s inability to account for funds disbursed between 2007 and 2011 was also discussed. He further mentioned the need to have a formal and larger representation of UNESCO in Sierra Leone to expand the UNESCO office in the country.

Another issue that came up during the engagement was his selection as a member of the High-Level Steering Committee of UNESCO, which is the highest body for SDG for education 2020, and also the Global Education Monitoring Report, which Minister Sengeh Chairs. The Steering Committee was inaugurated by French President Emmanuel Macron.

The Minister of Basic and Senior Secondary Education Dr. David Moinina Sengeh today addressed the High-Level Segment of the 41st UNESCO General Conference with the theme of the conference ‘invest in education.’

Sierra Leone is a member of the SDG 4 High-Level Steering Committee, committing to the Paris Declaration, which calls for Investing in the Futures of Education.

In his statement, Dr Sengeh said Sierra Leone has expanded access to quality education by continuously investing in education over the past three years.

“In the middle of the covid-19 pandemic, while many other countries contracted their education financing, Sierra Leone expanded its education sector budget to 22%.”

Stating that the government  believes that  “equity, quality and efficiency are not competing goals in education.”

The Minister disclosed that the Radical Inclusion Policy reaffirms that the government’s will stop at nothing until every boy and every girl can access and stay safely in school, no matter their physical, cognitive, psychosocial and socioeconomic conditions.

Stressing that now is the time for UNESCO to strengthen its presence on the ground, around the world, to champion these priorities, including the harmonization of national, regional and global benchmarks, the tracking and timely reporting on progress towards our national and shared global goals, and advocating for more local investments.

An investment in education  is the best gift we can give our children. “These investments must be driven by evidence-based policy development and decision making; strengthen digitization and innovation within education; and promote open collaboration and access to quality learning and teaching materials”

And that until every child around the globe can have an equal opportunity to access quality education, the world will remain unequal and limited in its ability to harness our collective human capacity. To save our humanity, our best bet for a more equitable and sustainable world, we must double down our investments in education now – nothing more, nothing less”.

The statement by the Minister came after statements by different Heads of State including Emmanuel Macron.

The high-level segment will aim to create a global political momentum to raise the profile of education and its investment imperative. It will adopt the “Paris Declaration” to renew national and international leaders’ commitment to invest in education – domestically and internationally – and to accelerate progress toward Sustainable Development Goal 4 (Quality Education).